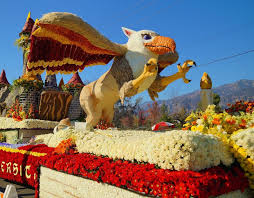 The first Rose Parade in 1890 was staged to show off Californiaâ€™s sun-kissed climate. The tradition is still going strong, complete with elaborate floral floats, musical performances and marching troupes (not to mention the crowning of the fresh-faced Rose Queen and her court), but the celebration now draws more than a million spectators who line the streets of Pasadena. The big Rose Bowl football game follows the parade. Later in spring, the event is spoofed with a day of costumed mayhem at the Doo Dah Parade